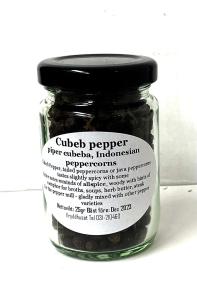 Where does Cubeb Pepper come from?

Cubeb pepper comes from Indonesia. Besides, the Piper Cubeba belongs to the pepper plant family. Due to its appearance, it has a small stem, and it is also called tailed pepper or stalk pepper. The pepper plant is a tropical vine that bears white flowers with small green fruits - berries, the Piper cubeba. These berries are harvested green just like black pepper and dried under the sun, whereby their shell turns black.

Cubeb pepper is, by the way, experiencing a renaissance today. Although it has been cultivated in Java since the 16th century, in Europe, it has only been for 200 years a substitute for black pepper. Nowadays, not everybody knows of its existence. Thanks to our celebrity chefs who cook with it in their restaurants and on TV. People become aware of this rare pepper, and its demand is steadily rising even though it is still scarce.

Culinary use of tailed pepper

Cubeb pepper is spicy, bitter, slightly lemon-tasting, with a warm-camphor-like aroma. Its flavor is a combination of pepper, allspice, and nutmeg. It is preferably combined with other pepper varieties and can thus bring its benefits to a dish. In conjunction, it flavors marinades, broths, and even soups. It is best to add the tailed pepper at the end of the cooking process. Thus the temperature has to be under the boiling point. This way you get the best out of the pepper, it gives off its wonderful lemon flavor and does not get bitter.

Cubeb pepper can also be added to other pepper varieties in a peppermill and spice up your food at the table. In this form, the piper cubeba is not only giving the food its sparkling sharpness but also the invigorating, camphor-like, lemon-tasting freshness. Especially during the barbecue season while grilled salmon or steak a wonderful flavor to add.

Why not spice up your herb butter with Piper Cubeba?

In the beginning, due to its dominance, I recommend to get to know the Cubeb pepper first and use it sparingly. Therefore, combine it with other spices. Its flavor is exceptional, and using it needs some practice.

Cubeb Pepper in other national kitchen

Cubeb pepper is a typical spice in Indonesian, Asian, and North African cuisine. It is a part of oriental spice blends like ras el hanout. Likewise, it fits curry with lamb, poultry, and even beef. It also spices seafood and crustaceans with its unmistakable aroma.

Which herbs and spices can I combine Cubeb pepper with?