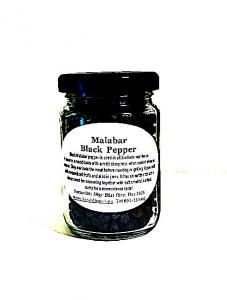 The Malabar pepper is a very aromatic black pepper with a pleasant sharpness and a subtle fruity aroma. Like the pepper plant itself, it originated in India. Exactly it comes from southern India, the Malabar coast, which is also called the pepper coast. Two delicious pepper varieties come from this region. On the one hand, the Malabar pepper and, on the other hand, the Tellicherry pepper, which is a late harvest pepper and therefore has a reddish color.

Culinary use of black Malabar pepper

Black Malabar pepper is used in all kitchens worldwide; it ensures a round taste with a mild sharpness when cooked whole in sauces. They marinate the meat before roasting or grilling. It goes well with caramelized fruits and also in jams. It has an earthy note and is always used for seasoning together with salt.

Piper Nigrum: the king of spices

Pepper is the oldest and best-known spice in the world. It is also the "king of spices." He found his way to Europe many hundreds of years ago. First by land from Arab and Persian traders and later by the Portuguese seafarer Vasco da Gama, who discovered the sea route to India. At times pepper was more valuable than gold. In the Middle Ages, it was even a means of payment.

Pepper is the fruit of a tendril plant. This plant has branches up to 10 m long and heart-shaped leaves. It grows in the tropics and requires a lot of water without being in the water. It thrives best in hilly areas where the water can drain off.

Pepper is picked unripe and dried under the sun, turning several times a day. Its originally green shell turns black and becomes wrinkled.

Not all pepper varieties look the same. Please have a look at our Long Pepper, Grains of Paradise, Grains of Selim, Voatsiperifery (it has a tail), or Assam ( looks like a blackberry)

Please put all spices in an airtight container. I highly recommend screw-top jars. Although they are translucent (unless they take brown pharmacist glasses), they can be cleaned very well. Five minutes in boiling water, and they are sterile. Then store the spices in a cold (15 ° C) and in a dark and dry place.