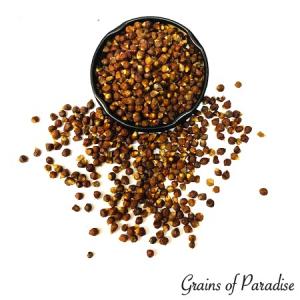 What are Grains of paradise?

Grains of Paradise are also called Guinea pepper, malagueta pepper, alligator pepper, or Meleguetta pepper and belong to the family of the ginger family (Zingiberaceae). The plant is a reed-like perennial, with yellow-red striped, approximate 6 cm large, fig-like capsules. Each capsule contains approximately 60-100 seeds, which are the Malagueta pepper. The plant originates in the tropics of West Africa.

Alligator pepper has a spicy-sharp and peppery taste. They have a fruity and immediately combative similar note. Besides, they have a cardamom aroma with slight notes of cinnamon (warming) and ginger. They also have a faint etherized scent and a slightly tart aftertaste. In African medicine, they are considered warming.

What to cook with paradise grains?

Grains of Paradise are suitable for refining vegetables such as eggplant, potatoes, and pumpkin, as well as flavoring fish, poultry, and lamb dishes.

In West Africa, Ivory Coast, this spice finds use as a pepper, seasoning braised lamb dishes, attiéké, and grilled fish, among other things.

A lamb goulash with tomatoes and onions, you can make your spice mixture Qlat Daqqa. Therefore take half a teaspoon black peppercorns, one clove, half a teaspoon paradise grains in a mortar. Now crush everything. Finally, flavor the lamb with cinnamon, nutmeg, and of course, some salt.

You can also season mulled wine and beer with paradise grains. In Scandinavia, Aquavit is still produced with you today.

Which spices can be combined with paradise grains?

Grains of Paradise only season your dishes at the end of the cooking time. It is best to put them in a spice mill or grind them fresh.

How do I store spices?

Grains of Paradise only season your dishes at the end of the cooking time. It is best to put them in a spice mill to grind them fresh. Also, store spices in an airtight container that protects them additionally from the sun and heat. The right place for spices is cold and dry.

Since when has Guinea pepper been available?

Guinea pepper first found its way to Europe in the 13th century. They came across the caravan route of the Sahara. At the time, the people highly value this spice as a substitute for real pepper. But then it loses its importance when real pepper came to Europe by sea. Today, demand increases again due to our love traveling, increasing cooking pleasure, and migration to Europe.