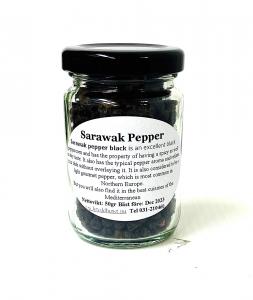 Sarawak pepper black is an excellent black peppercorn and has the property of having a spicy as well as dry taste. It also has the typical pepper aroma and refines your dish without overlaying it. It is also considered to be a light gourmet pepper, which is most common in Northern Europe. But you will also find it in the best cuisines of the Mediterranean.

Sarawak pepper black is the fruit of the tropical tendril plant Piper Nigrum. Their grains are usually picked just before they reach maturity. As they dry, their outer shell turns black, and they retain their typical wrinkled structure.

Its name Sarawak comes from his country of origin; in fact, the pepper collection occurs in this region. Sarawak is located in the north of the island of Borneo and belongs to Malaysia. This region is located in the northwestern part of the island. It borders the Kalimantan in the south/southeast and the famous Sultanate of Brunei in the northeast, as well as the Maformian state of Sabah. The Sarawak region is the largest state in Malaysia. The administrative capital of Kuching is also home to the region's largest exporters. Thanks to the enormous development of plantations and the intensive management of the soils, the population has reached 600,000 inhabitants.

The use of forests has been of great economic importance to the local population in recent decades. To meet the growing consumption and above all the needs of Western and Chinese consumers, there has been a 75% reduction in forest area since the 50s of the last century. Agriculture in the region, which is mainly based on rice cultivation, sago, clover, and pepper, has therefore played an essential role in the deforestation that has arisen as a result of agricultural transformation in the past centuries.

Please store this pepper in a dark, cold, and dry place like all spices. It is best to fill the peppercorns into a spice glass with a lid to make it airtight. All spices should be protected from sun rays. The ideal bearing temperature is 15 °C.